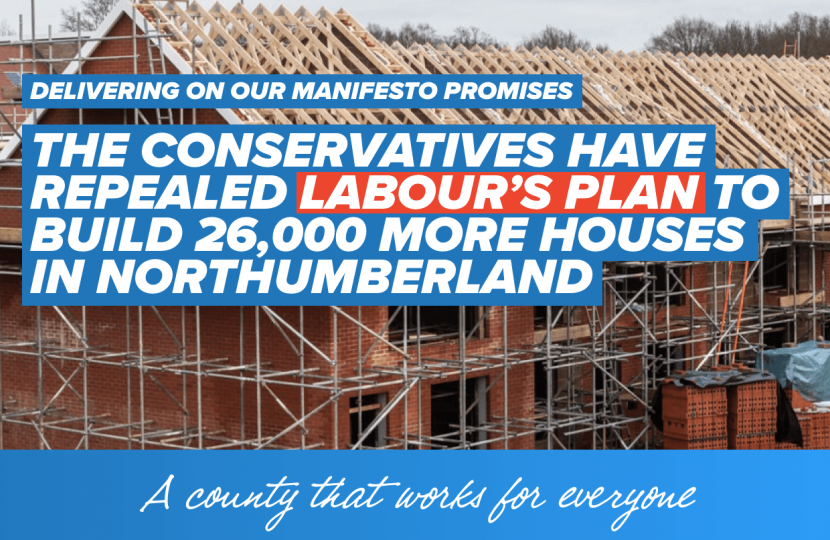 Controversial plans for more than 26,000 houses across Northumberland have been scrapped.

The thousands of new homes were part of the draft Core Strategy drawn up by the ruling Labour administration on Northumberland County Council before May's local election, despite widespread objections from people across the county.

But yesterday, Conservative councillors received cross-party support to vote against the strategy and see it withdrawn.

The vote against the strategy was a key pillar of the Conservatives’ Manifesto for Northumberland, and councillors will now create a new strategy, which will give more weight to Neighbourhood Plans.

The Core Strategy is an important legal document, which becomes the backbone of planning policy for the county over decades after it is approved.

Council leader Peter Jackson said: "I am delighted Labour's draft Core Strategy has been repealed as it could have spelt disaster for Northumberland for decades to come.

"It was ill-conceived and rushed through, but now the Conservatives will create a new strategy to meet the housing and economic needs of our county.

"I was also pleased to see councillors from other parties vote against the plan and Conservative councillors will work with colleagues to make sure we get our new draft Core Strategy right to provide a solid framework for years to come."

When the previous council approved the current document, the Conservative group asked for a delay to allow voters a chance to voice their opinions in the council elections, but Labour were keen pass the plan without delay.

The main concern, raised by Conservatives, was it would lead to a ‘development free for all’ by over-estimating the number of housing required between now and 2031.

Labour’s plan used data from 2012 (which has already been proven to be out of date) to allow for 24,320 houses in Northumberland, with an additional 2000 at Dissington Garden Village.

Other concerns, included building on greenbelt land where brownfield sites are available, and ignoring the economic needs of the county were also raised.

Councillor Jackson has also pledged to give Neighbourhood Plans more weight in the new core strategy. The current Morpeth Neighbourhood Plan was ignored by the planning committee in the previous administration when discussing the application to demolish parts of County Hall to build out of town retail. Conservative members hope to make disregarding Neighbourhood Plans illegal in the future.