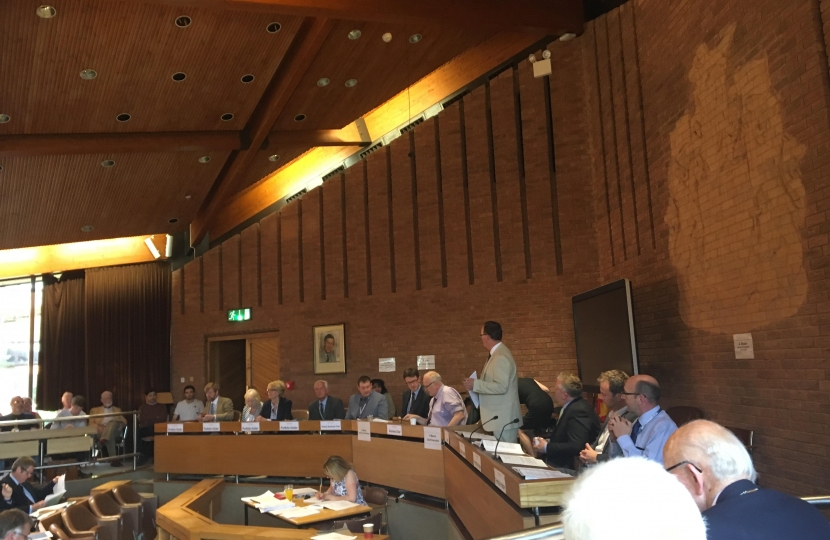 This is the first meeting of Northumberland County Council since the May elections. I am pleased that the Council has put their trust in me to be the Leader and I have appointed a very able and dedicated group to serve on my Cabinet.

This is a fitting time to set out the entirely new direction for our Council as set out by our new Administration.

The elections results showed that there is a desire for change in Northumberland. Conservative candidates received enthusiastic support from all parts of our county, from Berwick in the north to Haltwhistle in the far west. The voting swings to Northumberland Conservatives were the largest in the country not just from LibDems and Independents but in traditional Labour areas such as Prudhoe and Pegswood and in Cramlington and even in Blyth.

So what were the issues which drove this need for a fundamental change in our county?

There can be no doubt that residents were disgusted by the proposal to spend millions on an unnecessary move of County Hall to Ashington and various other vanity projects from the previous Labour/Independent Administration.

People have felt increasingly ignored over the last four years. Many of our towns and communities have been forgotten – a Council seen as not listening. So one example amongst many is the useless bus park which has just been opened in Berwick. After being told by local people that it was being built in entirely the wrong place and taking up what should be valuable car parking space, Labour went ahead and built it anyway, wasting £0.5 million in the process. It has turned out to be another Labour white elephant.

People have told us that they are worried about the County Council’s huge build-up of debt, doubling over the last four years under Labour with projections to rise to £1.5 billion or over £10,000 for every household in the county.

What are we going to do about all of these challenges?

And here I have just a word of caution. Some matters we have already addressed while others will take some time to work through.

As a new Council leadership we have been taking briefings on the state of our County Council after four years under Labour. I have to say that the challenges are immense. The legacy left by Labour is shocking. Amongst other issues we have:

In recognising these challenges and dealing with the legacy which we have inherited, this new Conservative Administration will bring a fresh start and a new approach to take our county forward. I am optimistic for the future of our Council and our county.

One advantage we have in in the very capable staff our Council has in all aspects of our service to the public. Despite the scare stories put about by others we value our staff and the work that they do. There will be NO so-called mass privatisation and, just as promised, the Council will stay in County Hall with area offices in each of our towns used much more to provide better local services.

Northumberland is a fantastic place in which to live, work and visit.

Our county has so many advantages but the key to our strength lies in our strong community culture.

The new Conservative Administration intends to run a County Council that is not only strong and stable but one which works with all towns and communities across our huge areas of responsibility.

We plan a fresh start for our county and a County Council that starts to listen to and work for local people from all parts.

If we can do this I believe that together we can do great things as a county.

I am very optimistic and I hope that we can all go forward on this journey together.