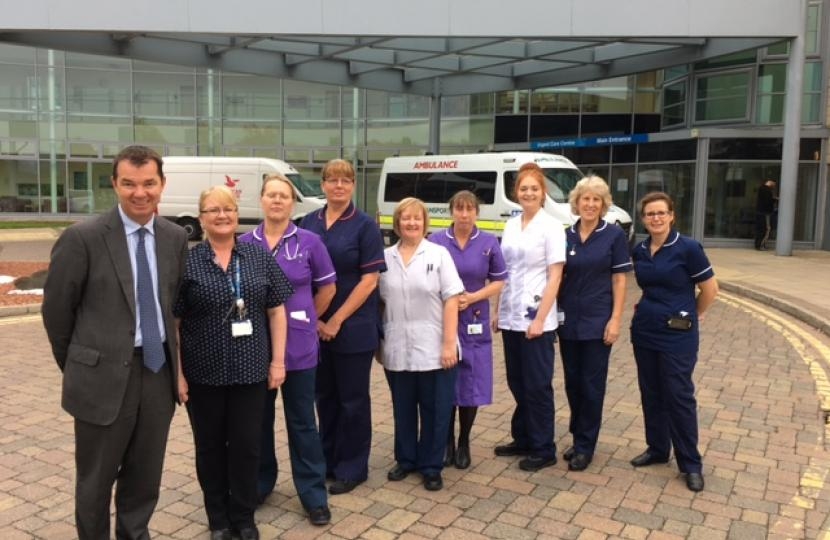 As we celebrate the 70th anniversary of its founding, Hexham MP Guy Opperman has spoken about the debt he owes to the NHS.

Mr Opperman said: "As a steeplechase jockey, I was crushed by a falling horse at Stratford races. My entire left side was staved in, giving me 14 broken ribs, a kidney cut in half, a perforated spleen and a pneumothorax – when you pop a rib through your lungs. I was incredibly lucky to survive, and it is thanks to my consultant, Dr Mike Stellakis of Warwick Hospital, that I did.

Once retired as a jockey, I was elected to be the Member of Parliament for Hexham in 2010. One year later, I was very busy, but 45, fit and in good health. I collapsed in the House of Commons and was taken to hospital for brain scan, where I was told I had a brain tumour the size of a woman’s fist. I had a meningioma – a slow growing tumour that starts just inside your skull and presses down upon the brain.

My NHS surgeon was the amazing Dr Neil Kitchen. He performed 2 incredibly complex operations – a cerebral angiogram and embolization of the tumour, followed by a craniotomy, where he opened my skull with a circular saw – of the medical kind – and cut the tumour out. He then stapled my head back together. As a result, I have a big horseshoe shaped scar on my left side behind my hairline.

I have to thank the doctors, nurses and physios who got me well and back to work as an MP. It is right that we recognise their enduring contribution to the quality of NHS care. And after a long campaign, I was delighted that this government was able to award wage rises of at least 6.5 percent for more than 1 million NHS workers in England earlier this year, and increase the NHS budget by £20 billion.

Illness brings perspective, and having been seriously ill with a potentially life threatening brain tumour, I resolved to campaign and fundraise for the NHS locally, and nationally, from political activism to charity hikes. Happy Birthday NHS!"