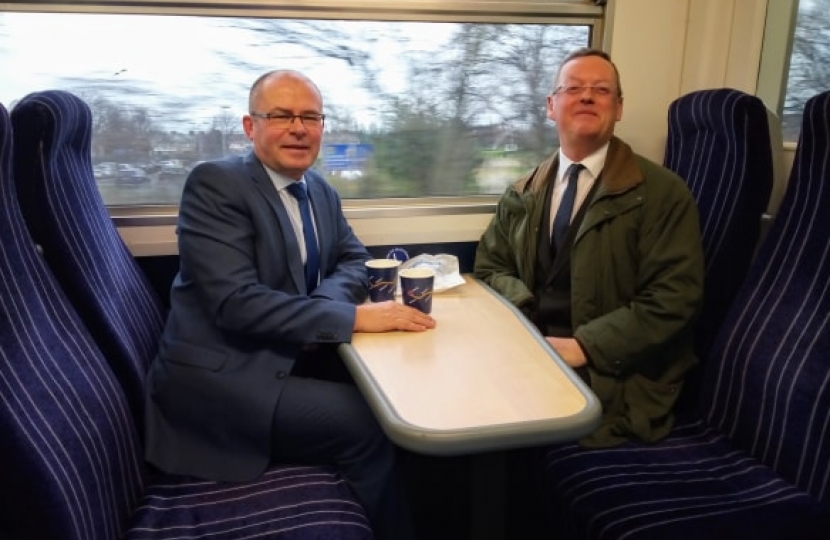 Conservative candidate for Blyth Valley Ian Levy has welcomed a huge boost to South East Northumberland by the Prime Minister Boris Johnson today.  Mr Johnson has thrown his weight behind plans to return passenger trains to Seaton Delaval, Blyth, Bedlington and Ashington which would have a major beneficial economic impact on the area.

The passenger service, which could be up and running by as early as 2022, would see passengers able to travel between Northumberland and central Newcastle in about half an hour or less. The service would also link to the Tyneside metro service at Northumberland Park.

Mr Johnson made the statement as part of a wider pledge to the North East saying; “We are committed to levelling up across Britain. For too long, towns and villages in the North East have been overlooked and left behind. This region voted overwhelmingly to leave the European Union; that vote was a vote for change and your voice will be heard.

“We are going to invest in communities across the North East and help people put the heart back into the fantastic towns and villages you call home. We are going to get Brexit done so that we can unleash the potential of this region. We will rejuvenate the high streets, save community assets and improve connectivity by restoring passenger services on the Ashington, Seaton Delaval and Blyth line – bringing these towns within 35 minutes of Newcastle.

“But we can only do this if we end the dither, delay and paralysis in Westminster. We need a Conservative majority government which will deliver for communities across Britain – not a Corbyn-Sturgeon alliance which would expend all its energy on two more chaotic referendums.”

Speaking about the announcement the Conservatives Candidate for Blyth Ian levy said, “This announcement shows that the Prime Minister is determined that communities in the Blyth Valley Constituency like Blyth and Seaton Delaval, will no longer be left behind. We need to back Boris now to get Brexit done so we can get on with important local projects like this.”

Jack Gebhard the Conservatives candidate in Wansbeck said, “This project will make a big difference to the lives of residents in Ashington and Bedlington. This rail line closed shortly after my own mother was born in Ashington and pretty much ever since Labour have talked about reopening it but have never actually achieved anything.

“I’m so proud that our Conservative council working with Boris’ government could get passenger trains running in just 3 years. We must now get out and show our support for Boris on the 12th December to make sure we aren’t let down by Labour yet again.”

Amanda Milling: ‘The PM still has support of Red Wall despite locking down the North’

Amanda Milling, chairwoman of the Conservative party, is wincing at the memory of being a government whip at the height of last year’s parliamentary paralysis over Brexit.