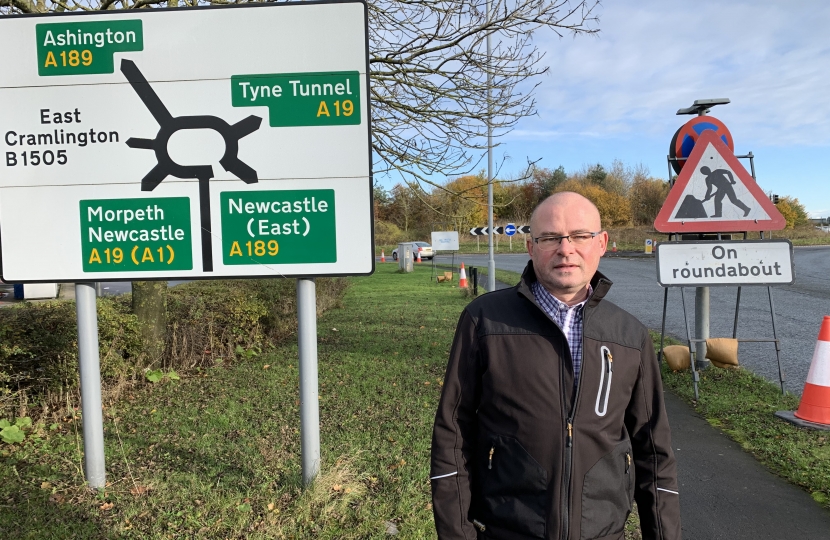 One of the major pinch points in Northumberland’s road network is in need of a new approach according to Ian Levy, the Conservatives candidate for Blyth Valley. Moor Farm roundabout will soon be one of the last remaining roundabouts on the A19 with works complete at Silver Link in North a Tyneside and underway at Testos in Washington to create flyovers.

The Moor Farm Roundabout had, in 2018, been considered for some minor works to remove one of its arms connecting to Cramlington, but the plans met with furious comments from residents.

Mr Levy said, “Every Cramlington or Blyth resident travelling through that junction can tell you with the Silver Link junction improvements compete, a lot of the traffic is now simply moved on to Moor Farm with tailbacks stretching for miles on some days.

“With a large number of homes now being built at Cramlington and some major employment opportunities opening up in places like Port of Blyth, traffic is only going to get steadily worse.

“I’m grateful that Highways England recognised the issue in 2018 but the solution of simply closing off one of the arms they proposed was not acceptable to residents and would simply not have solved the problems we face.

“The time has now come to do right by residents in Blyth Valley and Northumberland. If elected I will be doing everything I can alongside the County Council, to encourage Highways England to bring forward a proper scheme for Moor Farm which will help us unleash the potential of Blyth Valley and free it from the shackles of rush hour gridlock.”

Northumberland County Council is doing all it can to ease the pressure on residents caused by the Covid-19 virus. We’re backing businesses to ensure they are able to do all they can to help Northumbrians across the county.