Anne-Marie Trevelyan was first elected to the House of Commons in 2015 and has served as the Conservative Member of Parliament for Berwick-upon-Tweed ever since. In September 2021, Anne-Marie was promoted to the Cabinet as Secretary of State for International Trade and President of the Board of Trade. She has continuously lobbied for funds to dual the A1, a campaign she worked on for a decade before entering Parliament. Before this, Anne-Marie was a forensic accountant.

Our week at Conference

This past week, we have had a busy five days in Manchester attending the Conservative Party Conference. It is a great opportunity to meet other party members, businesses and colleagues from across the UK.

Anne-Marie Trevelyan, MP for Northumberland, has welcomed the announcement this morning that several sites in her constituency are to be beneficiaries of the mammoth culture funding package announced by the Government.

Guy Opperman MP and Anne-Marie Trevelyan MP have launched their highly succesful Christmas toy appeal for the fifth year in a row. 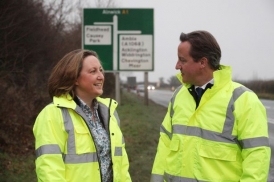